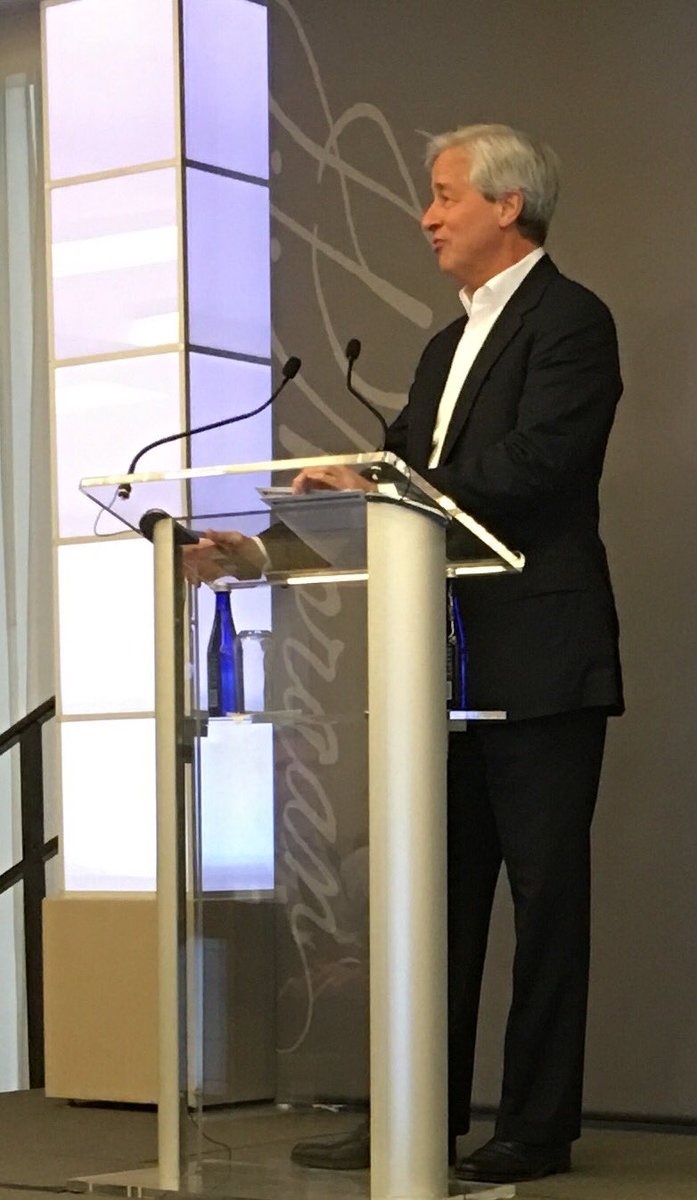 I had the opportunity to hear a billionaire speak the other day.

Jamie Dimon, CEO of JP Morgan is famous on Wall Street for being one of the “good guys.” He and his colleagues had a lot of insights about the current state of the world. Below are my distilled notes in case you are interested.

The cost of household debt is now down to a 30-year low, at only 10% of disposable income.

The U.S. economy is chugging along at a sustainable 1.5% growth. Consumers are doing better which is a huge part of our economy, and their personal balance sheet is the strongest since 1985. This recovery may seem long in the tooth, but there is no evidence that the length of a recovery predicts when it will end. Changes in direction come from imbalances, and right now we don't have any big imbalances because growth has been so slow. It's one of the slowest recoveries in history, and as a result should be more sustainable.

While the stock market has grown substantially, so have corporate earnings. The average forward price to earnings ratio over the past 25 years is 15.90, today it’s about 16.80. This level is a little “warm”, but not terribly worrisome.

US citizens have over eight and a half Trillion of dollars in cash, the highest percentage of gross domestic product in over 30 years. When the Federal Reserve raises rates, just a 1% increase would be a huge stimulus to the economy. People will be able to earn interest on their savings again. You can see in the graph below how depressing low interest on CD’s has been for the past seven years or so.

With Japan, and now Europe “printing” so much money, interest rates have dropped because of so much cash floating around.

Now about one-third of the bonds are "fixed loss investments" as opposed to “fixed income” worldwide. They will literally pay you back less than what you pay for them. You can see below, and more than two-thirds of government bonds are paying less than 1%!

“When you distort the price of money, it can end up going places that it's never been like low volatility stocks for yield. As a result, many  paying “defensive stocks” are at high relative valuations.” - Andrew Goldberg, Global Market Strategist, JP Morgan

“In 2007/2008 the energy companies were spending three times more building up their brands and advertising their alternative energy initiatives than actually doing anything about it. This is why the oil companies got caught with their pants down with this recent drop. Now they are finally spending money on alternative energy.” - Andrew Goldberg, Global Market Strategist, JP Morgan

China's consumption of the world's commodities is something to see and appreciate. They are still growing.

America today has the best hand in history, better than any country on the planet. We have all the food, water and energy we'll ever need. We have the best military and natural borders, the best economy, the best schools, the best businesses and the best work ethic. We have low corruption and a very resilient political system, albeit with policy problems. Potential potholes include student debt, Government bureaucracy, it's too hard to get a business started, interest rates, and the bond bubble.

Geopolitics is on our minds all the time now, but they rarely have really impacted the US economy, with one exception, World War II.

Five things to get growth going in America:

1. Immigration - We need to have the educated foreigners and undocumented workers have a path to citizenship.

2. Help those impacted by free trade - We can’t deny that people in America have been hurt, we can take some of the savings to help lift these communities up with training and stimulus.

4. Improve our infrastructure - Infrastructure spending is where both democrats and republicans are right. Both sides think some needs to be done, but they disagree on how to do it effectively. There has been so much waste and pet projects in the past; the negotiation process has completely broken down.

5. Reduce unnecessary regulations - They are sand in the engine of economic growth. A barber needs four licenses to open up shop in New York.

A story from the financial crisis

The CEO of Bear Stearns called me out of my birthday dinner and said he was in big trouble. He needed 30 billion by the market open tomorrow.

That night, hundreds of people took a shower at 10 p.m. got dressed and went to work.

We eventually found a way to get the 30 billion overnight with the Fed's help, and Hank Paulson was calling every hour pleading with me to buy Bear Stearns.

Now keep in mind that buying a house on fire, is not the same as buying a house, and not only that we had to buy it by Sunday. It happened to be across the street which helped, and we had our people there the next morning managing the derivatives book exposure.

We paid one billion for the bank that had been worth twenty. The cash on cash return was only 6%. We assumed two hundred billion in risk, and the Fed took 30.

I would not do it because the government came back and fined us ten billion, and then we probably spent another three to four in litigation. Any president in the world could call me, and next time, I'll tell them to (paraphrasing) “take a hike”.