The following slides represent some of the best illustrations that I know of for explaining trends going on right now, particularly in finance.

Below, you can see how the US large company index performed over the past 20 years. 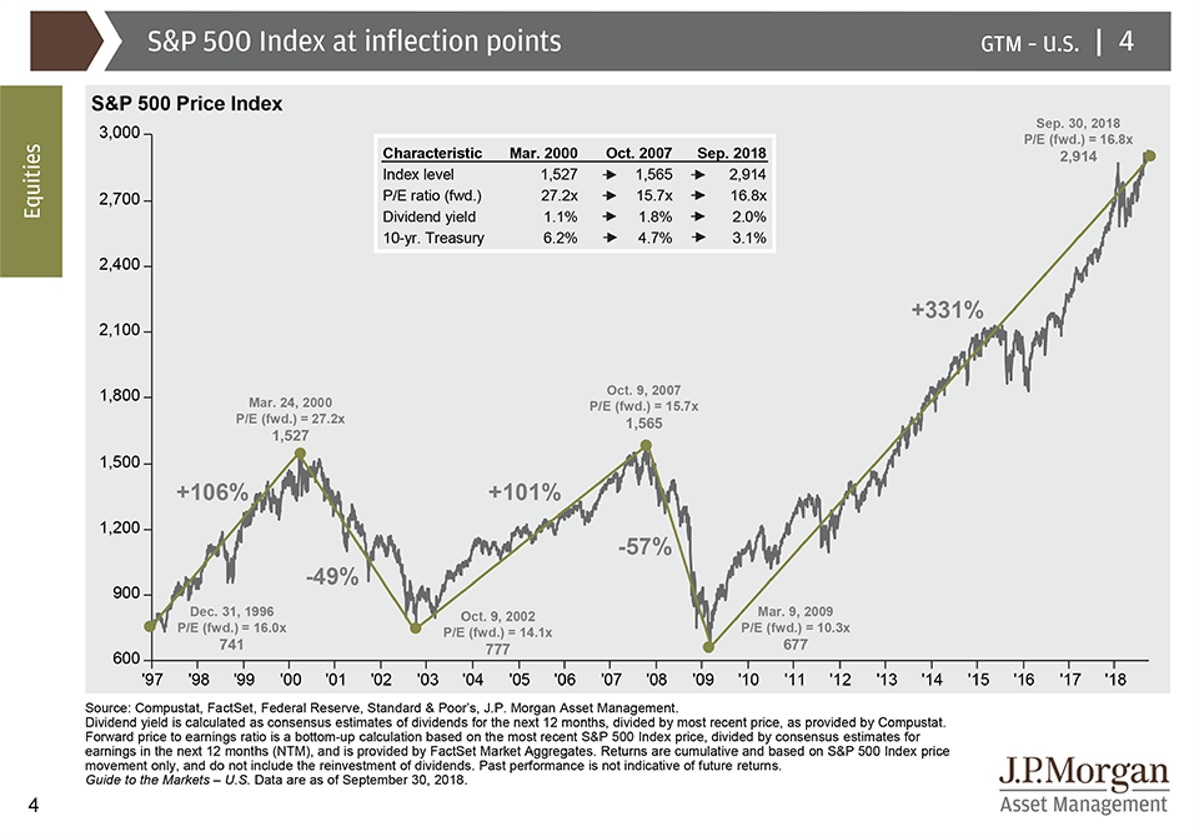 Followed by the 101% increase from the financial shenanigans and housing crisis era, and its 57% drop in 2008 and 2009, which was the second worst crash in history behind only the great depression.

Since 2009, it took about five years to get back to even from that original period.  We are up a full 331%, which is a bit scary if you look at simply in this context.

However, unlike a ball up into the air, the rules of physics do not apply to finance.  What goes up must not necessarily come down.

We're currently at 16.8, ever so slightly elevated.  Even the scary and famous cyclically adjusted price to earnings ratio, also known as Shiller's PE or the CAPE ratio is at 33 versus 27, so just ever so slightly high.  The dividend yield is right on par with averages.  Price-to-book is a little high but very close.  Price-to-cash flow is a little high, so the valuations are not extreme, and that's one of the things that people don't realize.

We had a massive tax cut recently and also companies not only in the US but across the world are benefiting from rates and quantitative easing from virtually all of the central banks across the globe.  This has driven profitability up significantly to keep the higher price of the stocks in line from a ratio basis on how much the companies are making. 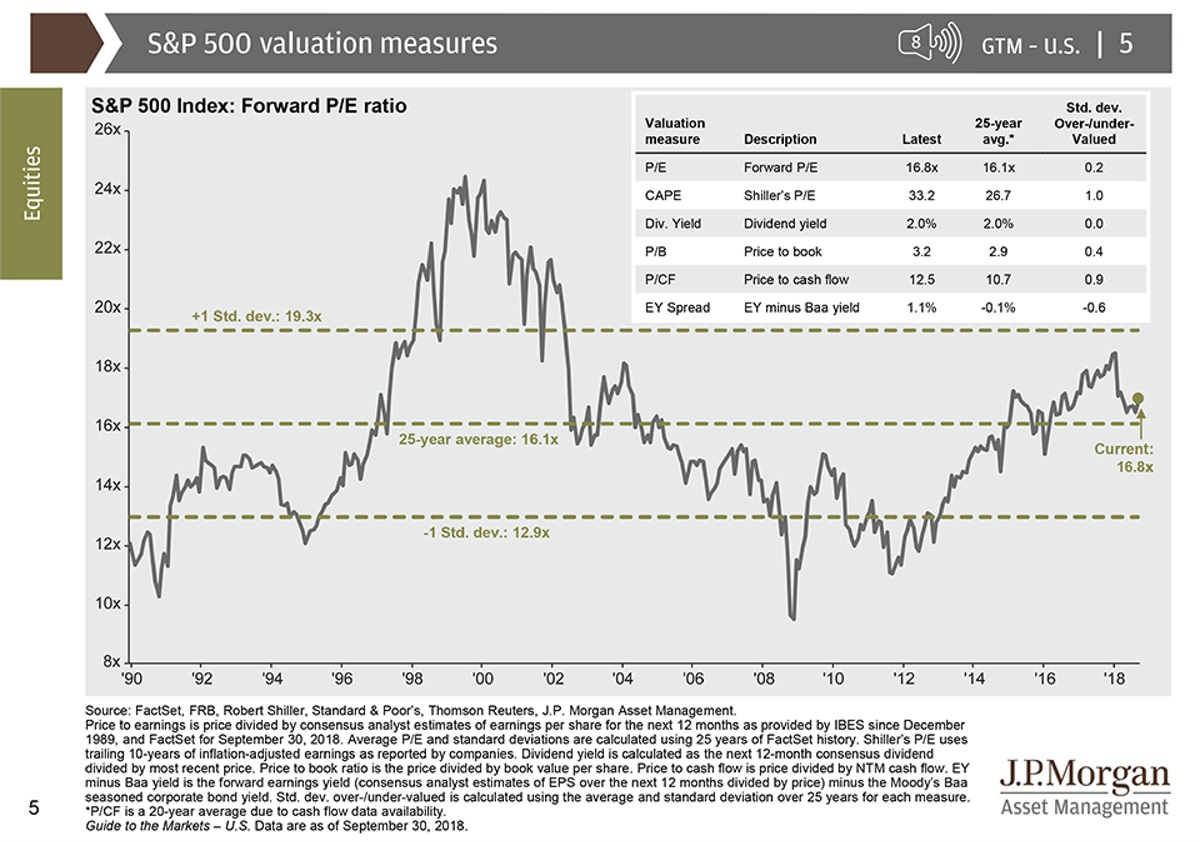 The next slide, slide 14, is a little bit difficult to read, but once you understand what the red numbers mean, it's fairly simple.

The red numbers mean what the worst drawdown from top to bottom was in the year and for 2018, you can see we've had a 10% drawdown that was back in February when we had that scary pullback, and you see the year before we were only down 3%.

The average intra-year drop over the last 25 years or so is about 14%, so this is helpful when we're dealing with daily volatility and the news of the day.  It's a chore to try to flush out whether the financial media is just trying to scare us into making sure we watch the evening news, or if there's actually something of substance going on.  More often than not, there is not anything of substance going on when it comes to your retirement assets.

We don't need to make adjustments depending on what's going on Twitter or CNN. 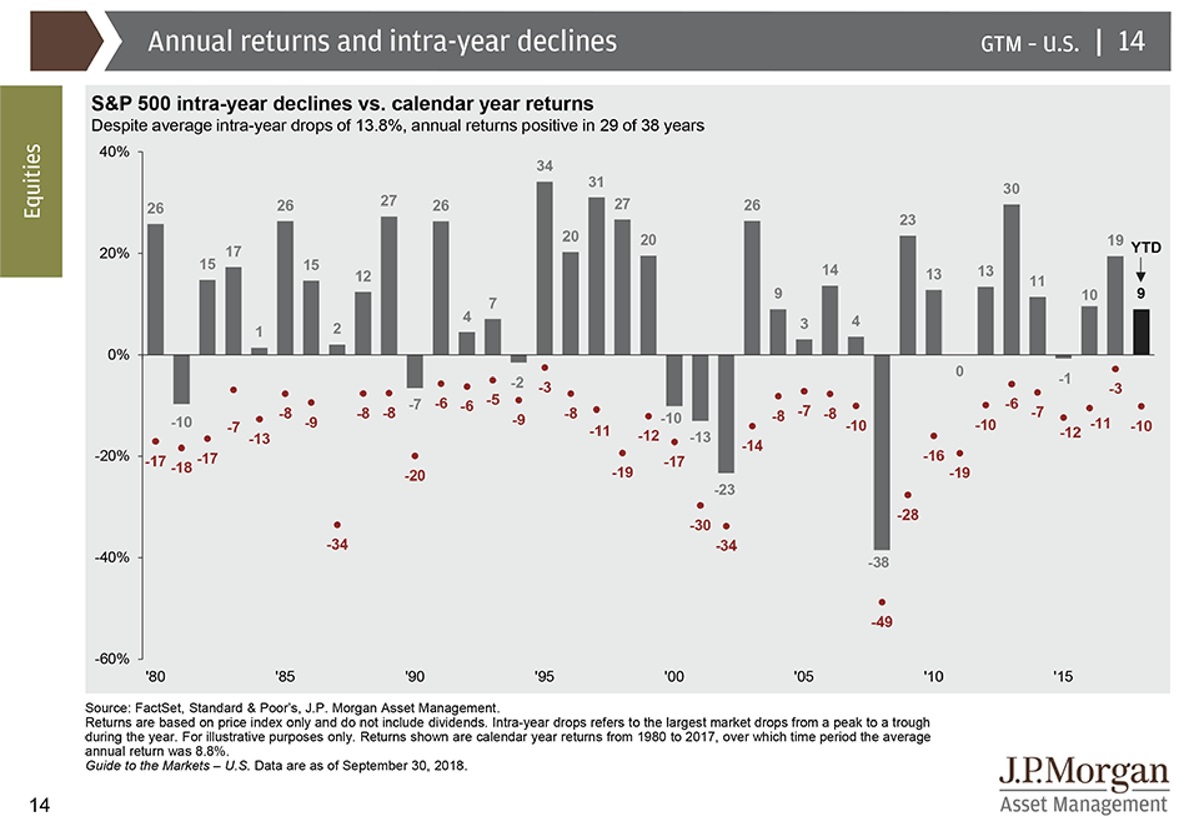 We want to stay the course, and you can see that on the average stock market tends to perform to 8% to 10% per year and of the last 25 years or so, we've only had about seven down periods.

You'll see in the next slide, 17, again with the what goes up must come down comment and this goes all the way back to the year 1900.  You can see the great roaring 20s and the great depression and how that recovered over time and you can tend to see a pattern here, it doesn't mean it's going to repeat of course.  We are incidentally in the longest bull market in history now. 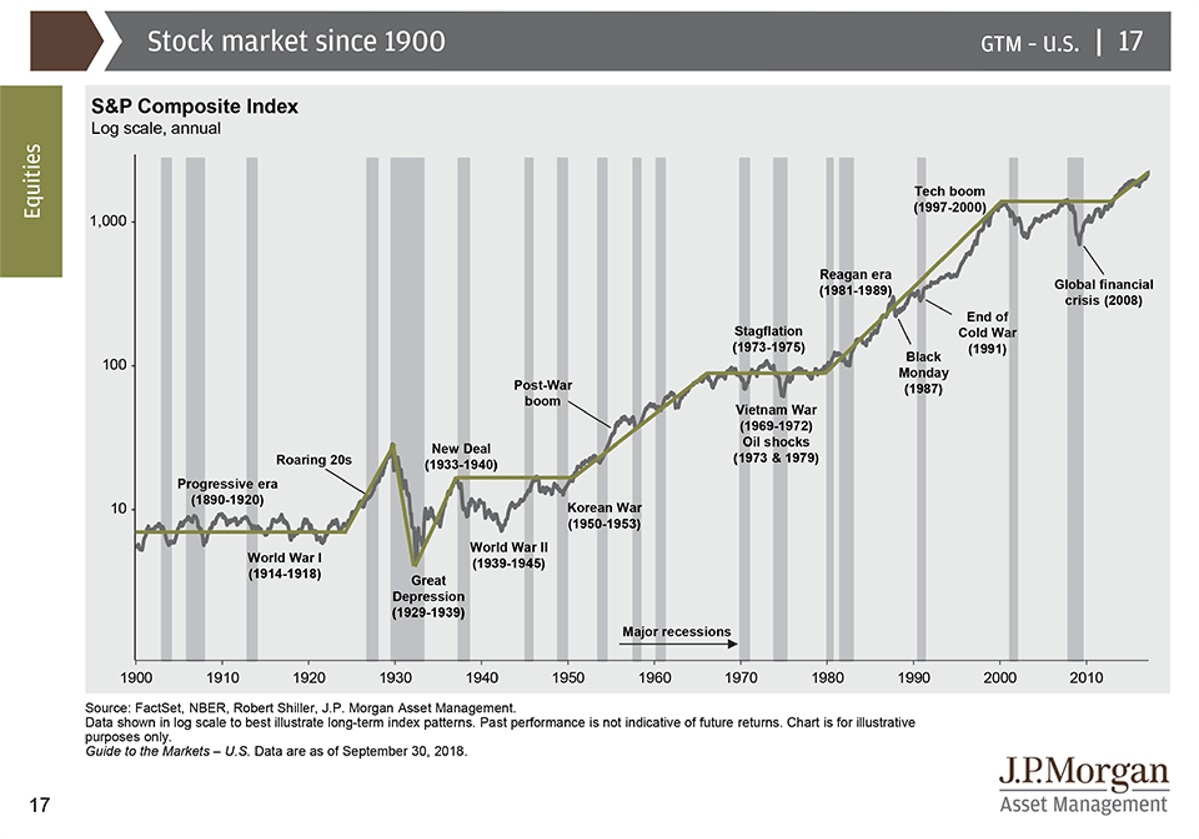 Below slide 18, we are looking at the great depression on the right with the large circle.  This is a hot topic with the new and is no doubt something that's going to happen again.  But you can look here on the various years where we did have a recession and how long it lasted, and you see depression was the biggest one, 26.7% and that lasted four years.  That was a very extreme one, but you see the most recent, the second worst crash in history was down 4% on GDP, and that lasted about a year and a half.

The stock market took a little bit longer, about five years over that last period, but these recessions do happen and are a natural part of the economy. 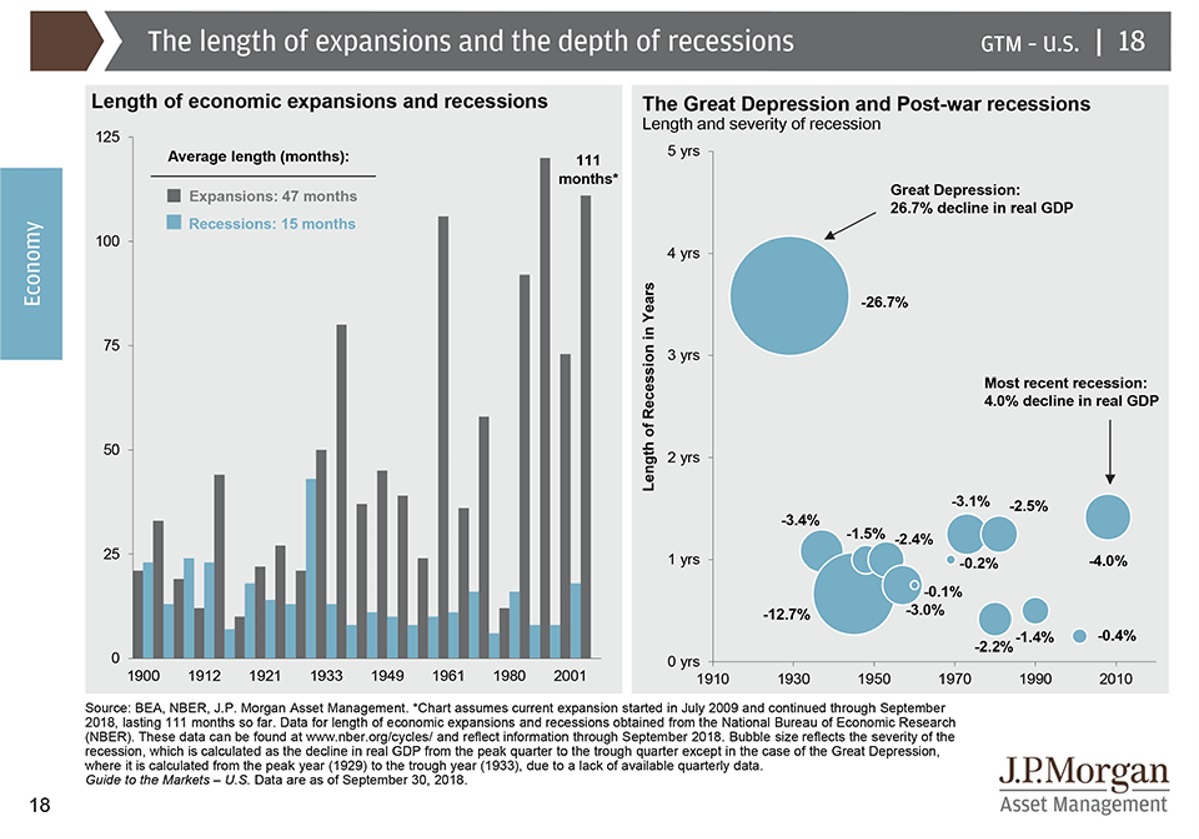 There's a lot out there in the news on the job market, and unfortunately, technology has made a negative impact low-skilled workers.  However, you can see on the chart on the left the 8.8 million jobs that were lost during the financial crisis, and now we've gained more than double the jobs back.  Now one could argue they're not all great jobs, there are plenty of "burger flipping" or "Uber" jobs with no health benefits.  But if you want a job and you can set an alarm clock, you can get one today, which is better than one can say for many times in history.

Furthermore, if you have a college degree and live in Minnesota, your unemployment rate is less than 2%, which is an amazing job market right now.

In the upper right-hand corner, it's kind of interesting how you can see where the labor force participation rate dropping, a lot of aging out and there have been rumors that opioid addiction crisis across the country is also one of the factors involved here.  You can see on the bottom right all the info finance and business jobs, manufacturing jobs that have been created.  There are leisure and hospitality as well along with education, mining and government are minimal. 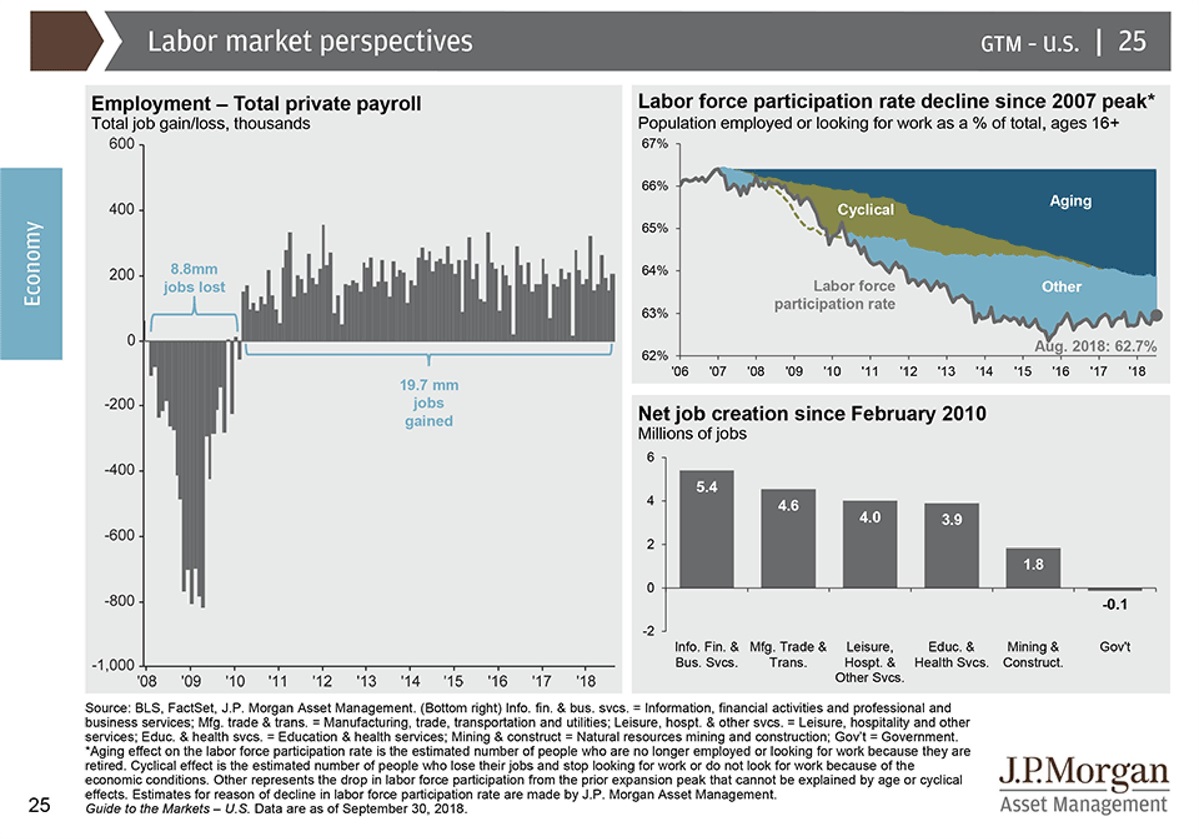 Here is slide 26 to show anybody that is struggling with higher education thoughts in your household or perhaps grandchildren.  You see that college or greater unemployment rate at 2.1% and that's actually lower in the great state of Minnesota.

Then you have your average annual earnings by highest degree earned closing in on $100,000 for those with an advanced degree.  There is a lot of debate around college and then particularly around whether certain professions are worth the education costs and time required.  It's certainly something that concerns me with our four children, but if you do pick a career path that is viable, it still can make sense.  Hopefully, in the future, we will have lower cost e-learning opportunities that will slow if not reverse the rate of education inflation that we are seeing. 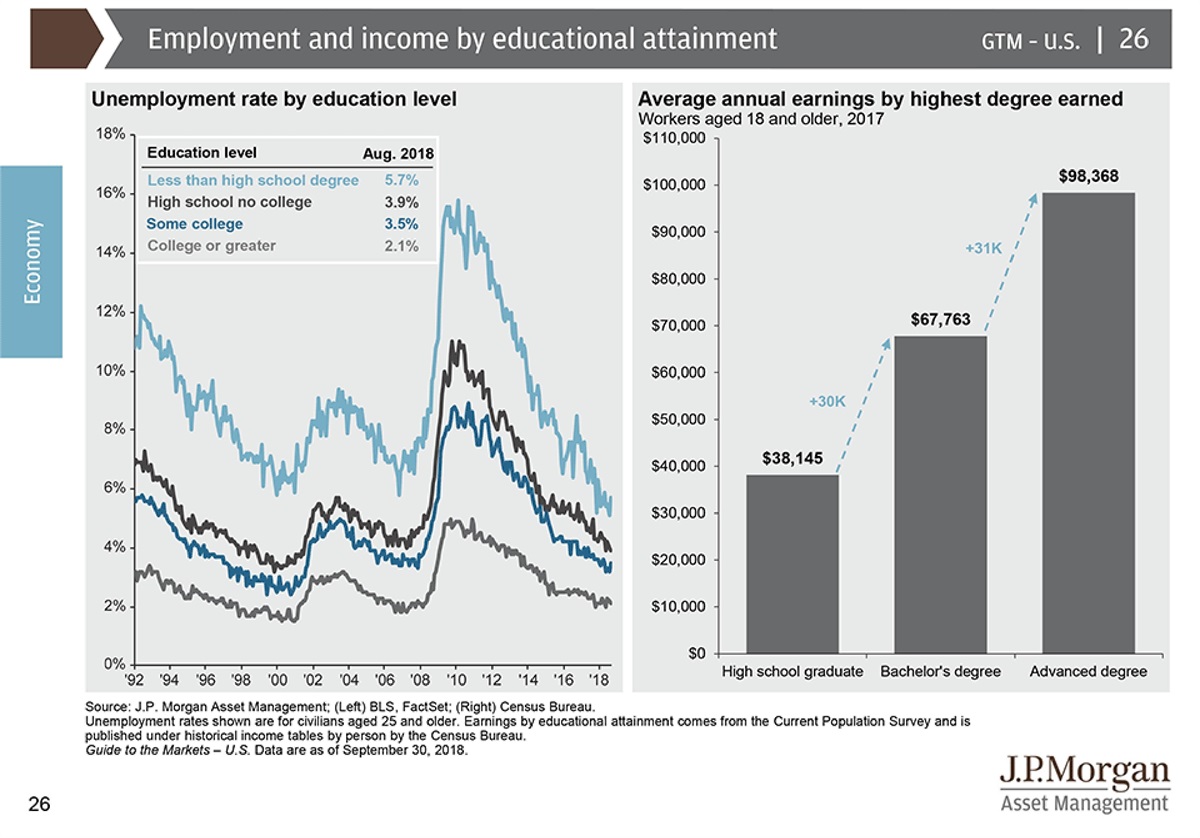 Slide 27 is an interesting reminder of inflation.  We're looking at somewhere between 1% and 3% inflation right now.  This is a big target for the fed and they're keeping eye on it and it's looking like we're going to have one more interest rate hike this year, and two more, possibly three more next year depending on how the economy does and other factors.  Then hopefully we are at the tail end of the interest rate hike cycle.

The Fed has said they want inflation somewhere around 2% give or take and we are there.

Few are talking about it these days, but it's interesting you can see the price of energy has gone up 10.3% recently, oil has continued to be very volatile. 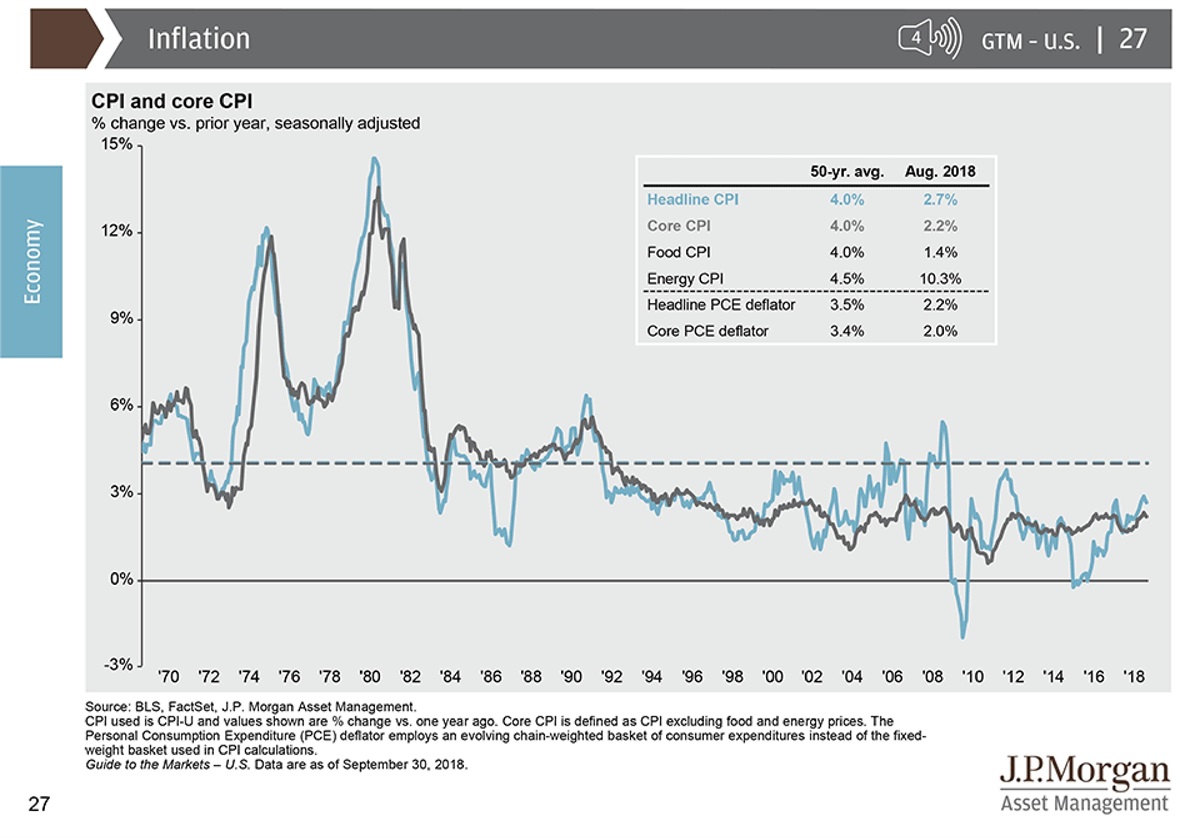 You can see the fed funds and interest rate chart on slide 31 where depending on who you believe (market or the Fed) we are looking like we're maybe three-quarters of a point out from where the Fed wants to be long-term, which is great.

The thought is too that everybody pretty much knows these interest rates are coming, the fed has been very clear in communicating this line of reasoning, and the markets should not be thrown off by more rate increases. 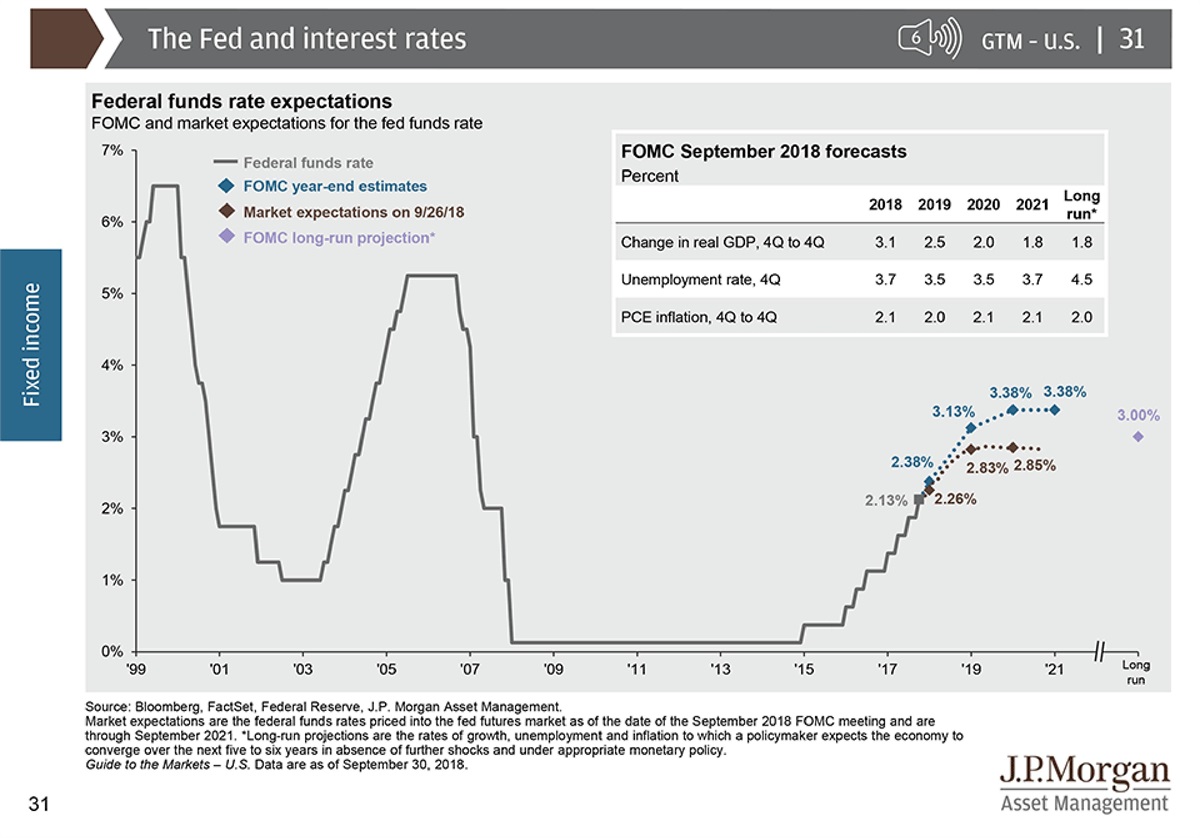 We are, however, seeing some slowdown in the real estate markets as mortgages are becoming dramatically more expensive.  Interest rates are still at historical lows and for you can still get a mortgage under 5%, but for those of us that were able to get them around 3.5%, the payment difference is substantial.  So that may keep people in their homes longer as they don't want to turn in their old mortgages for new higher rate ones to relocate.

Slide 42 is a fun illustration on how quickly we forget.  We had an investment committee meeting recently where we were talking about emerging markets returns, and if you see at the bottom right you see "EM" which signifies emerging markets like Brazil, Russia, India, China, et cetera down 7.4% this year for a variety of reasons.

But last year they were up almost 38%!

So it's what have done for me lately in everything, but with investing, you have to have some long-term awareness.  Otherwise, you will jump from lane to another and make things worse. 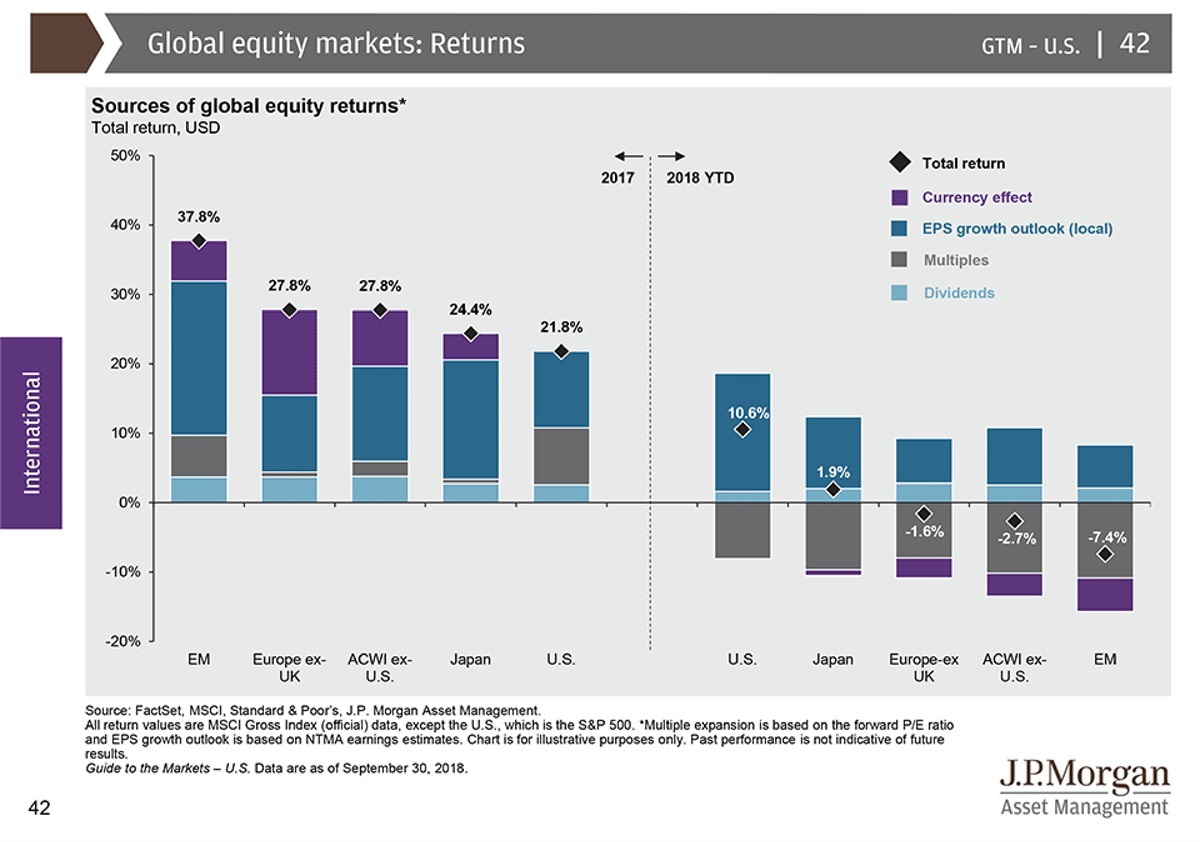 Earnings per share growth been the bulk of it, and we're hoping that those earnings can continue to grow, but the biggest boost to earnings per share was that tax cut.  It remains to be seen how much the consumers will react upon the added money in their checking accounts each month.  The economy is still two-thirds consumer driven, but it does look like the consumer tax benefit will possibly be twice as much as the benefits of the corporations in the US.  That money should trickle into more consumer spending, which is good for everyone.

Below you see the US dollar, which has recently appreciated 36% in the last five years or so.  This is one of the reasons international has had some problems.  We don't know what the currency is going to do, but we do occasionally get slight up or slight down results based on exchange rates.  We look at currency hedging occasionally, but for the most part, we don't. 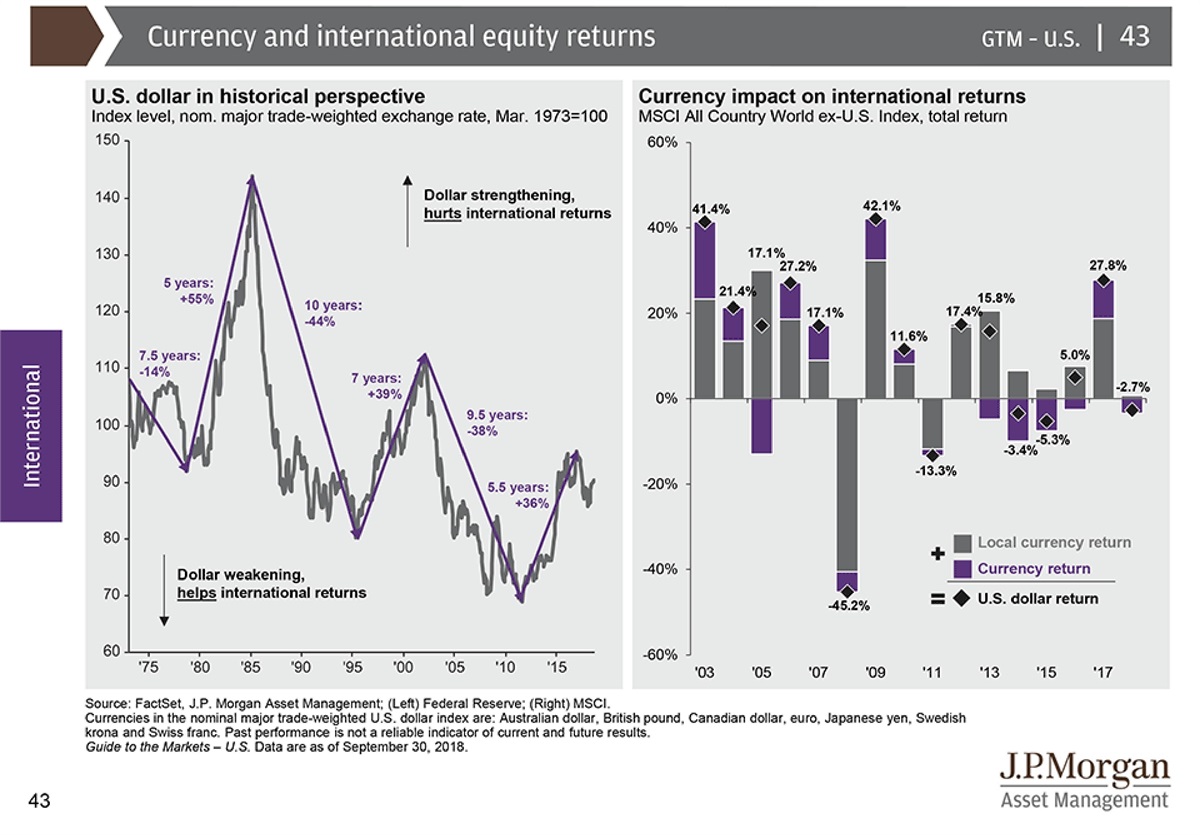 It shows the non-US stocks that are up 115% since then, and this is not to say that non-US stock should also be up 300%, but it's interesting when you look at the chart on the upper left you see the price to earnings ratio on the S&P of 16.8.

As you've heard us say before, we don't know what the stock market is going to do or what particular region is going to do better, but from a valuation perspective, non-US stocks do seem to be more attractively priced at this point. 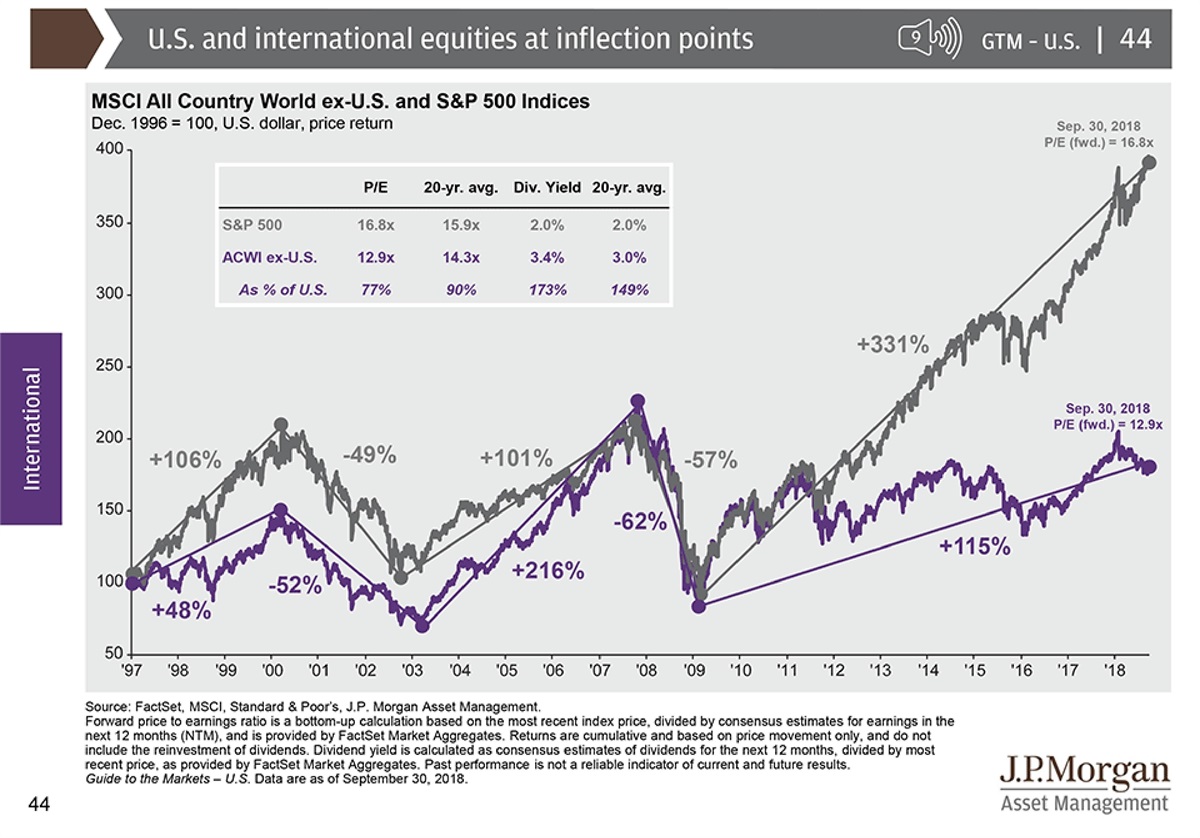 This is shown a different way on the right-hand chart.  You can see the current price to earnings ratio on the US versus the average, you see the blue diamond versus the purple bar, you see it's quite a bit higher than the average, although there is a wide band there and then you see developed markets, abbreviated DM, at 15.5, Europe at 13.5 and emerging markets lower as well. 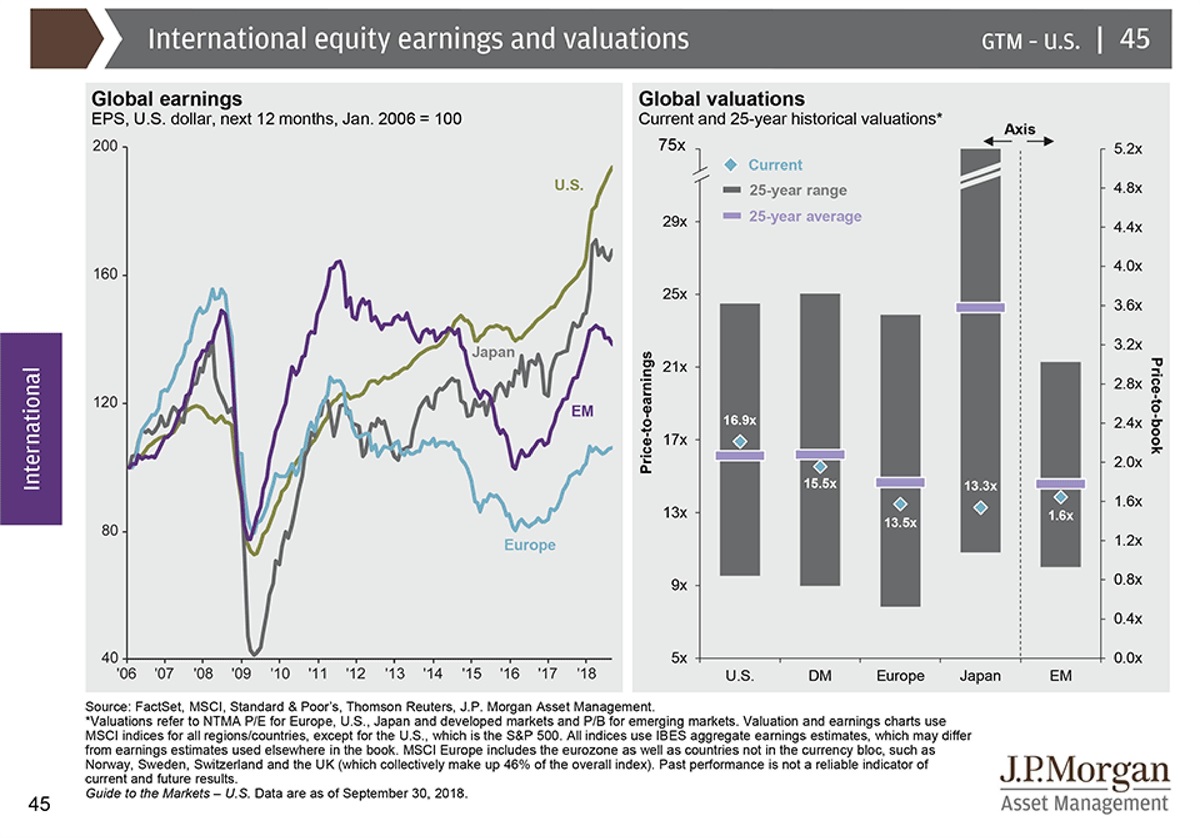 For those interested in commodities or metals, oil, et cetera, it's interesting to see the current level of prices versus where the averages are.

Everything commodity wise is quite a bit lower than average, not to say that we need to do anything here, but interesting to see.

Every week someone seems to say "this is an all-time high, the market has to crash, should we sell?" 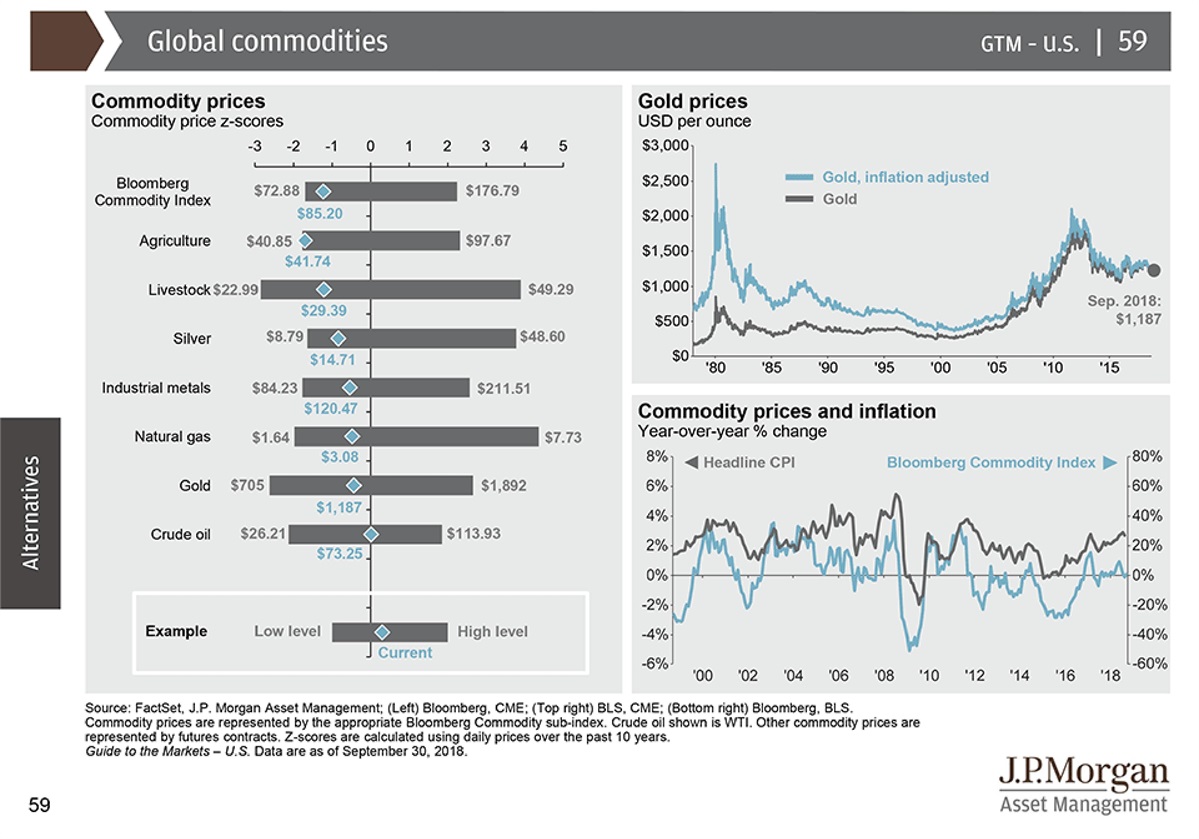 Slide 65 is interesting in that regard.  When you see an equity market peak, if you were to invest two years or 24 months for an average market peak, you'd have a 41% return or said another way if you get out too early you would miss out on a 41% return.

Twelve months prior is 23% and so on, and you see two years after a market peak the average return is a -1%.

So if you have again five to twenty years worth of "safe money", you can ride out the market peaks and valleys and hopefully do much better over time. 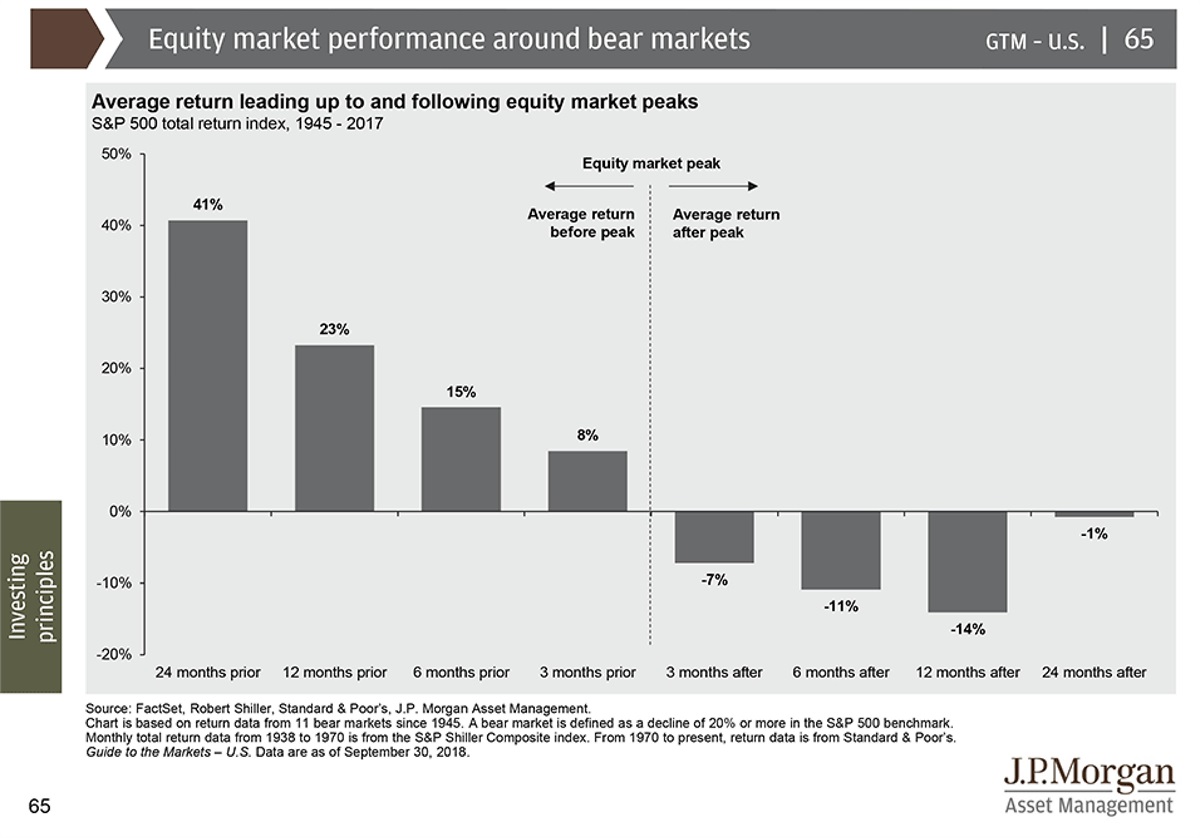 Please let me know if you have any questions and thanks for taking a look!

Source JPM Guide to the Markets

These articles represent opinions of the authors and not those of their firm and are subject to change from time to time, and do not constitute a recommendation to purchase and sale any security nor to engage in any particular investment or legal strategy. The information contained here has been obtained from sources believed to be reliable but cannot be guaranteed for accuracy.