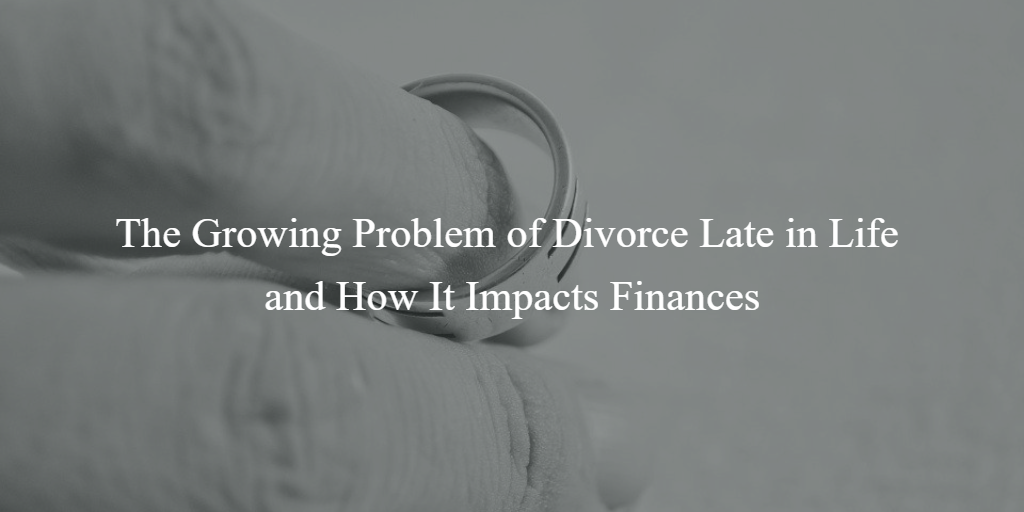 The good news is divorce rates are down dramatically.  The bad news is that's because young people aren't getting married.

We are seeing a large uptick in “gray divorces” or late-in-life divorces and have been studying the impacts on finances.

There are some takeaways from a recent talk I went to by Lila Vasileff, who is a certified divorce financial advisor, among other things.

Discussion without humor, affection, and empathy also are good predictors.

It was disturbing to learn that the average couple waits six years before seeking help for marital problems, yet fully one-half of all marriages end in the first seven years.  It seems like there's an opportunity there to maybe get with a counselor before things get really bad.

Thirty years ago, around 1990, only one in ten people over age 50 were divorced. If you think about the older members of your family, it was relatively uncommon for grandmothers and grandfathers to get divorced.  However, ten years ago, fully one-quarter of people over 50 are divorced, and that seems to be getting worse.

More than 55% of gray divorces occur with couples that have been married for 20 or more years.

There is a divorce echo effect.  Remarriages beget a higher likelihood of divorce.

It's tough getting divorced late in life after saving for retirement for decades together.

It's a concern on how the income and assets will be split, how an extra household would add cost to the finances, and it makes it harder to be able to retire.

Furthermore, it's very difficult for a homemaker to transition back into the workforce if they've been out for many years.  This often results in depression or anxiety.

Topics of divorce, from a financial perspective, include:

Retirement assets are a big deal to split up.  Taxes are important to consider.  Spousal support is less likely for a late-in-life divorce, and a lot of people that get divorced don't have good money habits or communication between the two of them, so there can be a lot of surprises.

Another fact:  Compared to singles in America, married people accumulate about four times more savings and assets.  Those that divorce have a whopping 77% fewer assets than singles.

This cold fact is why I like to say “Stay Married” after meetings.

Older woman are particularly vulnerable.  Money issues are the number one worry.  Typically, there is a 45% decline in income, 32% of women feel that they are financially worse off than they expected to be, and 27% end up living in poverty.

There are a lot of complicated financial decisions that have to be made when divorcing, and it is advisable to consider enlisting with a planner that specializes in divorce and a good divorce attorney.

Thank you for taking a look,