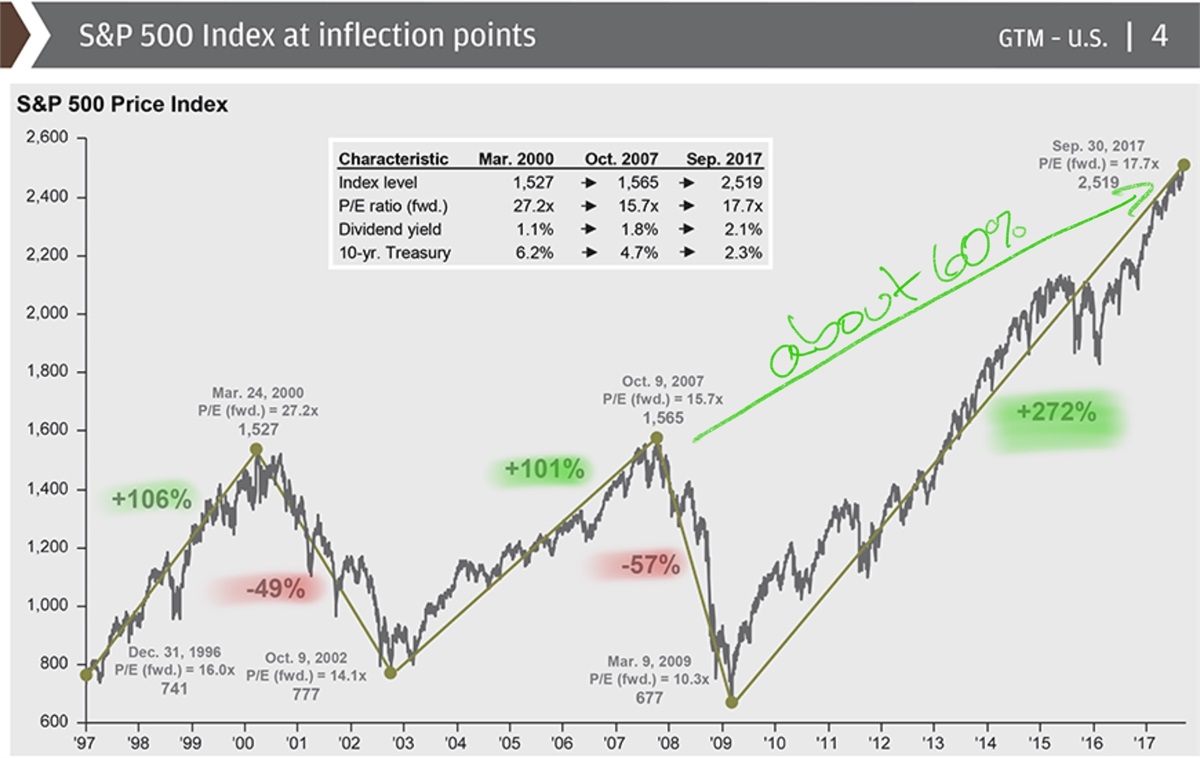 When will the market crash?

It seems like every weekday for the last five years someone has asked me, “When is the stock market going to crash?” 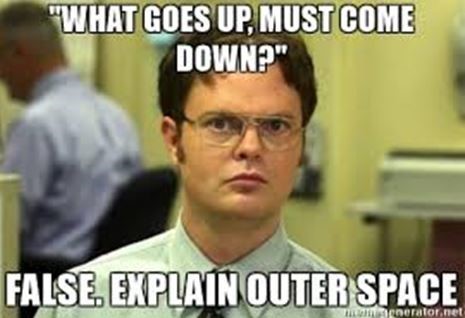 This has been almost the longest bull run in history at 9 years, and as it stands we're essentially at an all-time high on the stock market.

It's natural to think what goes up must come down, after it was Isaac Newton who coined the phrase. But that is a law of gravity, not finance. 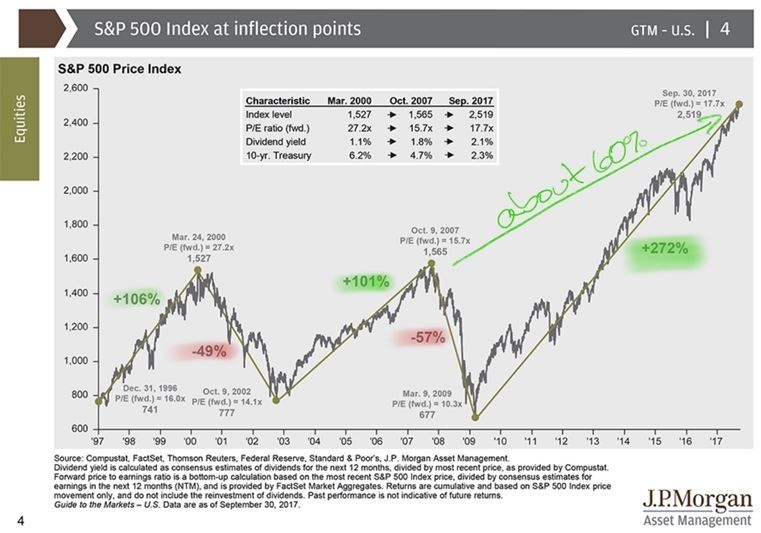 We've obviously all gone through significant trauma in the past two decades with the dot.com crash and the financial crisis. The proximity of the crashes can make it seem like another must be just around the corner. While a pullback would not be unexpected, a crash is not inevitably just around the corner either.
Fortunately, those two crashes recovered within five or ten years, but it still doesn't make going through them any fun. In fact, it can be terrifying.

It's worth mentioning that we do want to have a buffer of "safe money" that will not crash in value during the next pullback, for many clients. This can include bonds and cash, alternative investments, pension, payouts, and more.

I like to estimate how many years' worth of a down market we can live through with the safer assets. For example, if you have $250,000 in safer investments and need $50,000 a year from your accounts, you have five years of a buffer. Most people I find are happy with between 5 and 20 years' worth depending on their risk tolerance.

The tech crash took about eight years to get back to even, and the financial crisis was five or six years. So a client that with 10 years or 20 years' worth of “buffer” is better prepared to ride out the next storm. 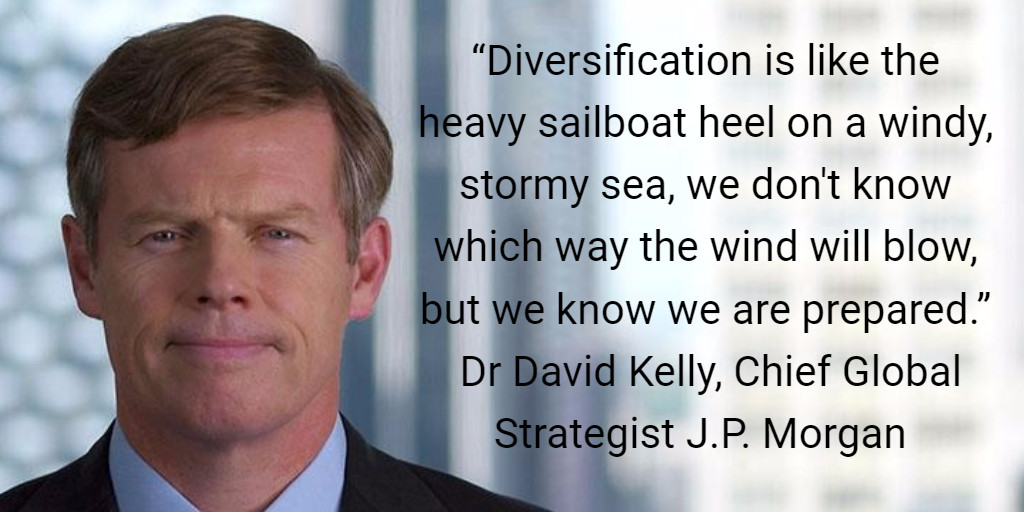 I like to discuss in advance what we're going to do when we have a pullback of more than 15%. My research indicates that selling stocks is usually not a good idea, so we want to live off that safe money that we've been accepting lower returns on during the tough times.

This can mean that our asset allocation actually gets more aggressive in down periods, but this also aligns with the “buy low, sell high” strategy that value investors like Warren Buffet have pioneered.

So what do we see in the future? How is this bull market going to end?

I recently heard the Chief Investment Officer of Oppenheimer Funds, who oversees about $250 billion, review the leading indicators that would normally be flashing red if we were actually coming to the end of the bull run.

I'll give you a spoiler alert, according to him the indicators are not flashing warning signs.

1.     Global growth would have to be decelerating. It is not. We have positive growth in GDP across the world. China and the Emerging Markets are obviously the strongest, but we have strength in Japan, the US, and the European Union.

2.     Volatility would have to be spiking. It is not. Volatility is literally the lowest on record, and we have the mentality now that many people will buy the dip whenever we have a small pullback, and it's keeping the market relatively stable.

3.     Wages and inflation would have to rise. Unfortunately, they are not despite a very low unemployment rate, actually akin to where we've been in the 1970s. The wages are not increasing, and this is partly a structural thing where companies like Uber are drawing higher-paying jobs out of the job market and into the "gig economy."

4.     The fed would be planning to tighten monetary policies significantly. It is not. The fed has communicated that they plan on raising rates four times in the next 12 months pending data; however, a 1% increase in the fed funds rate will still keep our overnight lending rate below the rate of inflation, so the thought is with the strength of the companies across the world, we can handle an ever-so-slightly higher interest rate.

5.     The ECB would have to tighten substantially and it will likely not. We can continue to see very small moves of tightening, but it's as if they've learned from the past going to quickly a disaster in the making, so caution is warranted and that is how they are moving forward.

6.     Corporate animal spirits would have to be taking off. They are not. Mergers and acquisitions and IPO’s are not going as they have in the past when we've been in bubble territory.

7.     Equities would have to be expensive relative to bonds, and they are not. Equities are slightly extended but relative to the earnings increases that we've seen over the past 10 years; their earnings ratios are only slightly elevated. Furthermore, the bonds are unattractive as we know that they're paying low rates and with the rising rate environment, they tend to go down a little bit in value. 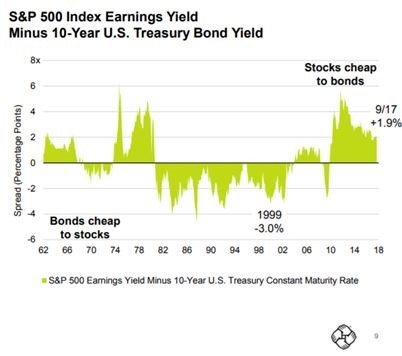 8.     FAANG stocks would have to be extreme valuations. They are not. This includes Facebook, Apple, Amazon, Netflix, and Google. Their price-to-sales ratio was 5.2 versus the dotcom bubble when the price-to-sales ratio was 16 for the internet companies of the time. Also, the returns that they have had are high but nothing compared to what happened. The FAANG stocks are up 138% versus the S&P 500, but in 1997, they were up 379%. 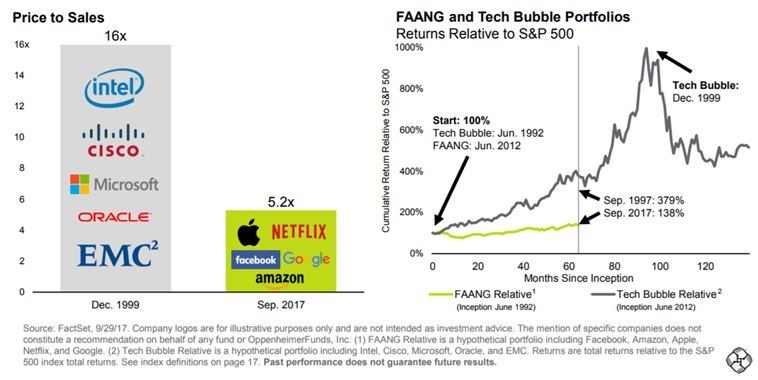 9.     Investors would have to be euphoric about equities. They are certainly not. I can tell you firsthand that this continues to be one of the most hated stock market rallies in history and people are still very pessimistic which is actually a good sign. 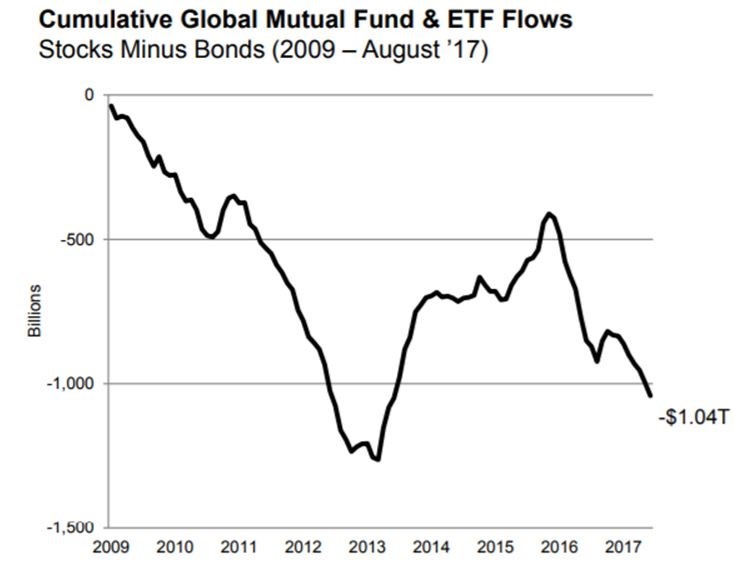 10.  High yield spreads on junk bonds would have to be rising, and they are not. This is the spread between a safer bond, and a junk bond and the bond market is very good indicating bubbles, and if the junk bonds are not likely to pay back, the market demands higher rates and this is not happening.

11.  China's credit binge would have to threaten the global financial system. This does not appear to be a pressing problem. The savings rate in China is still 50% so yes they're borrowing a lot, but they also have a tremendous amount of money on the citizen's balance sheets.

12.  Global trade would have to be weakening. It is not. Imports are continuing to go up around the world.

13.  Finally, the US dollar would have to be strengthening significantly. It is not. This makes it harder to sell goods overseas when there are competitors available with lower currency costs.

I know that was a lot of “”, but I think it is a good overview of where we stand relative to the past, and some of the indicators that we look at.

Thank you for taking a look!