Knowing Your “Money Scripts” Can Change Your Life

Rick has been a longtime hero of mine.  In fact, at one point he was to be my wife Allison's backup financial planner if something happened to me.  No doubt his name still is mentioned somewhere in my financial football.

Personally, I have several dominant money scripts, and I believe knowing about them can help improve our lives.

In the interest of full disclosure, some of my money scripts are:

If you would like to see how your money scripts might be impacting your life, check out the short survey immediate below here, and the key is at the end: 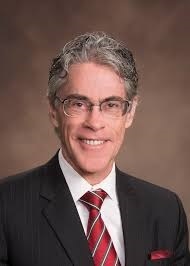 Below are my rough notes in case interested in learning more. 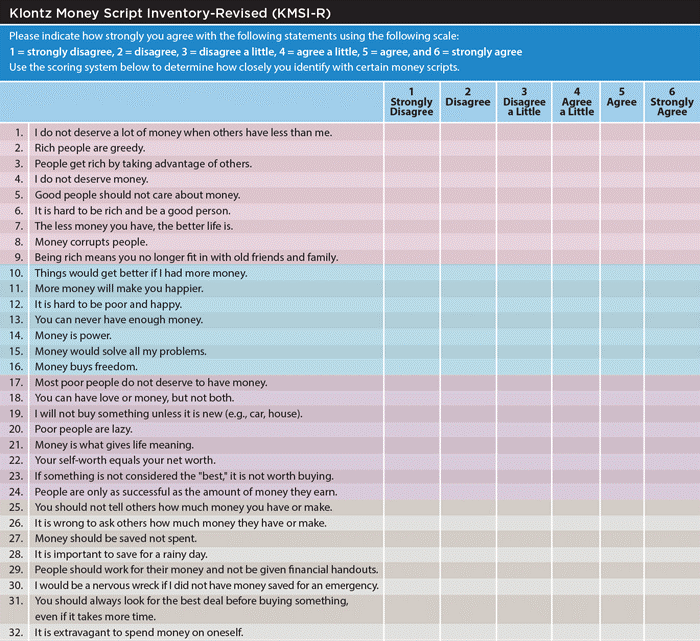 Ninety percent of decisions are made by the limbic system, which is quick and emotional.  Decisions often do not get the attention they deserve to achieve good results.  There's an iceberg of emotions underneath the money behaviors.  We have no idea what we're dealing with when we work with a client that's not saving properly, spending too much, not saving in their 401(k), et cetera.

"Start shaking the dust off your college psychology books.  This is where financial planning is going next."

Numbers, unfortunately, are so much more friendly than psychology.  We use the Klontz Money Script Inventory.  That's KMSI-R.

"Emotions are anchored to money, and financial issues are rarely addressed, much less evaluated in the financial planning process."

Clients are often not aware of how they make decisions so quickly.

Not saving enough was tied back the death of a child at six months to one of Rick’s clients.  Money problems are often brought back to abuse issues, and they're far more common than we can imagine.  Clients don't know where the resistance is coming from following our advice.

"I will go broke unless I start a new business" was one that he had with an insatiable entrepreneur client, and he said, let's talk about this.  Is this your money script talking?  They were able to resolve the issue with the knowledge that serially opening businesses was not a good path long term for this person.

Money scripts are like “reading your lines in the wrong play.”  Like his wife who plays in Macbeth, technically, the script is not written by the actor.  It's written by the playwright.  It's that conscious belief after practicing that we pick up typically a little child from our parents.  We learn how money works by what they say and don't say. 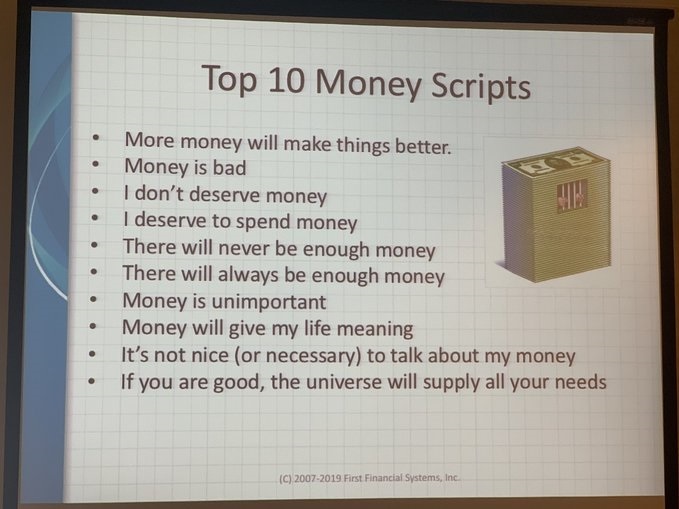 Strange money beliefs and behaviors are normal, but they're typically formed by age 10, and now they go on autopilot in the limbic system and remain unexamined in real life.

Addressing this might be the first time they've ever gotten to their bedrock of money beliefs.

Clients are showing a lot of shame around money, and there's a huge amount of generalized anxiety and shame around not only net worth but income, debt, et cetera.

Imagine a room full of 200 people, of your peers, and be assigned to stand in groups according to net worth and income, how horrifying that might be to most people.  He went through an exercise telling his peers what they all made and their net worth over a series of eight hours and said it was one of the most excruciating and draining days of his life. 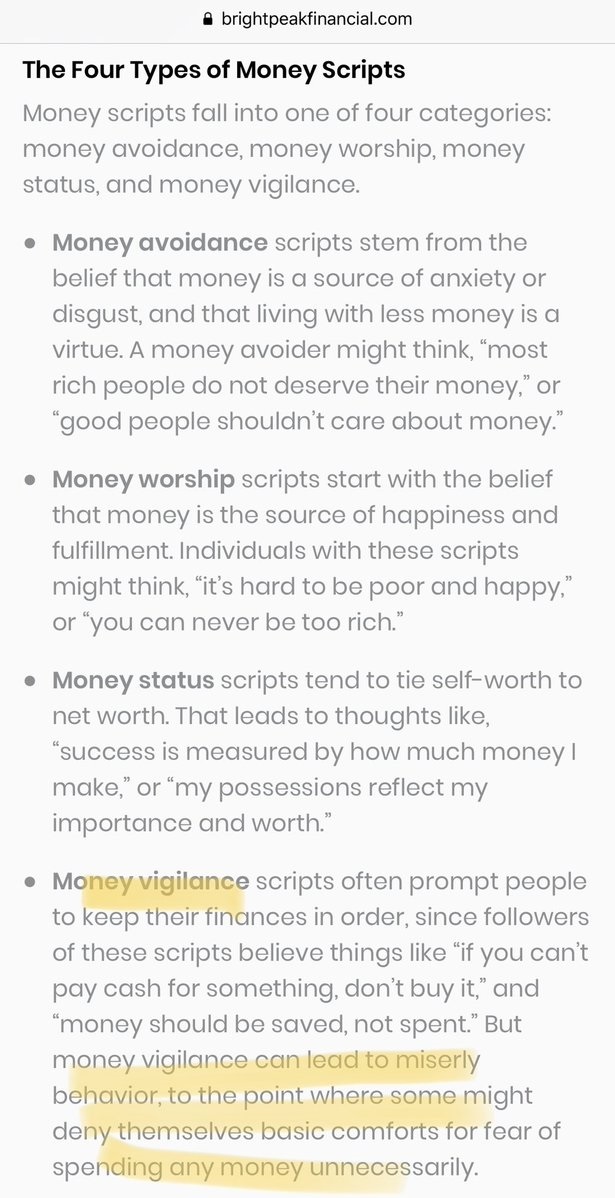 Money scripts are contextual.  They don't work in the wrong environment.  One example he gave is his long belief that hard work equals more money.  He said there are really four variations of that.

Hard work can equal more money, but hard work can also mean no money, and you can also work soft and still make money, or no work and no money.

You have to pay attention to the money scripts that they think are true.  The more attachment there is, the more it needs to be addressed, and again, usually based on some trauma.  It doesn't matter what the trauma is.  Money problems are not about money.  They're about the same issues that cause substance abuse, mental health crises, relationship problems, et cetera.

There can also be small or repeated traumas like being criticized frequently by a parent.  These are called “complex traumas” and are actually very common and can be harder to get around than single, severe traumatic events.  For example, he helped one client who had his fiancee murdered in front of him, some of the trauma was obviously impacting his life.

We all and our kids will have money scripts.  There's no way around it.  He brought up the example of his 4-year-old daughter thinking that being rich meant owning a lot of couches or being rich meant being snobby.  Despite everyone in her life being “rich” at the time, she had formed some sort of evil Hollywood villain character.

Money scripts limit our choices, our clients' choices, and the whole financial plan.

Often, the goals that they express to us aren't their own priorities.  They're what they think their priorities should be.

Most people have 50 to 200 money scripts, and they're running unconsciously 24/7.

He's looking for strong, absolute beliefs in money scripts.  These would include the word never, are, always, such as money is power, or never sell real estate.

Then we went on to money disorders from the Diagnostic and Statistical Manual of Mental Disorders 5 aka the DSM-V.

Rick mentioned that the Klontz money survey is clinically tested and has a lot of positive results in the academic world.

He said in the DSM V money problems are normally not dealt with by therapists.  Therapists tend to have an aversion to money.  Some of the money disorders in the DSM-V include: 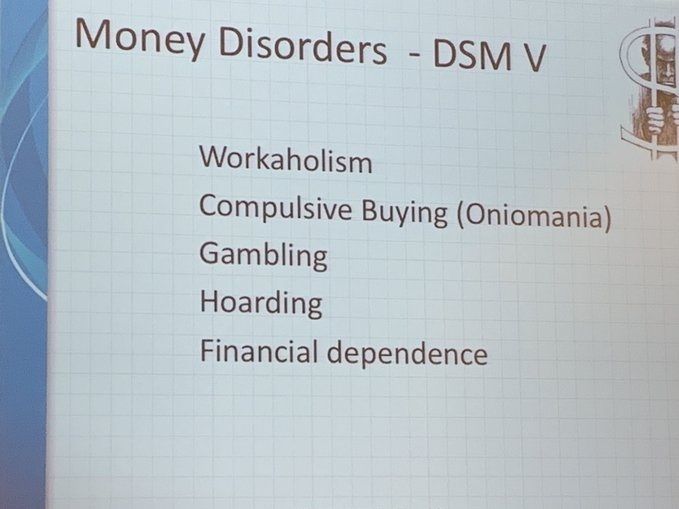 These are all results of underlying “money scripts,” problematic money behaviors include

Example from Rick:  My client came in and was melancholy.  He said his dad died six months ago, and they are very sad, but it wasn't the problem with losing .  It was a problem that they inherited $5 million, and they had no idea that he was worth that much.  Why are we depressed?  Why are we so upset about the situation?  They discovered that their number one money script among both the husband and wife was that if money wasn't earned, it wasn't worth having.

If they hadn't discovered that, they probably would've tried to fix the situation unconsciously by self-sabotaging and getting rid of the money.

It's really important to take the shame out of money scripts.  We are not there to judge or “should” on them.  They will “should” enough on themselves.

The four categories include:

You have ways to work with each type.

For those in money status, pause and questions.  Focus on sharing.  Create an emotional well-being plan.

For the money vigilant, set aside money for fun, money for spending.  Curate a plan for perspective and remember you can't take it with you.

"All final behaviors, no matter how illogical, make perfect sense when we understand our beliefs about money." 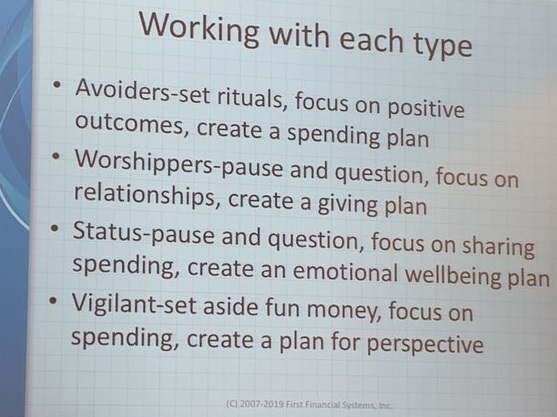 He had the next client spending $30,000 a year on animal charities because of trauma from a divorce when the child was very young, and the cat and the dog were the only comforts that she got at the time and not giving substantially to the animals was betraying that relationship.

He worked with Winona Judd on her spending problem, and the managers would regularly have her sign a document that said I'm going to run out of money if I keep spending this much, but that cognitive approach probably only works 20% of the time.  They had to get to the root of the spending problem to right the ship.

This is how you change people's lives in a positive and meaningful way.

You want to look for money scripts that include the phrase "never" to "sometimes."

This is a tool that we can use with clients to help them realize their fundamental money scripts and potentially add to meeting agendas where appropriate.

We want to overcome the fact that 75% of Americans are living hand to mouth and can't come up with any money for an emergency.

If you bring the money script to light and they don't change, that's where the therapy comes into play.

We are to reinforce that this is normal.  You can't think yourself into changing.  There's not a thing to feel shame about, but we can refer to financial therapists without them feeling shame.  It's time to start clients.  The reason people don't, or financial planners don't, is they don't know who to refer to, and they also think that it's a negative connotation or negative referral, and they don't want to introduce that dynamic.

Remember therapists focus on behavioral change something that we're not equipped for, so it's helpful to get them to the actual experts. 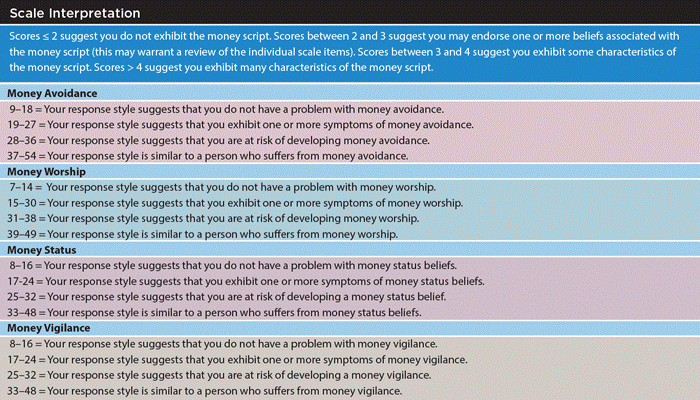